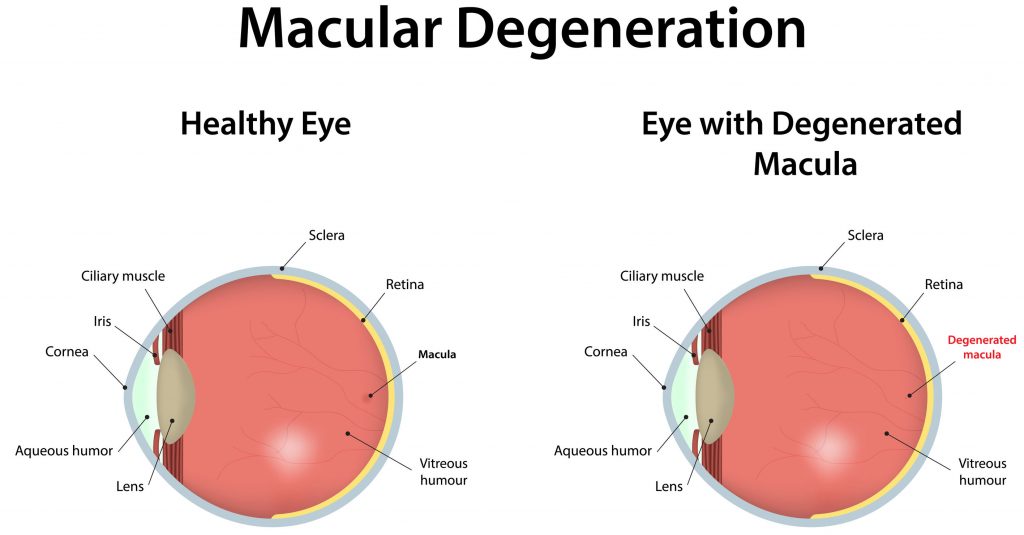 The macula is the central area of the retina with highly-concentrated light-sensitive cells called cones. It gives us our central vision, necessary for reading or any close work.

Please see How the Eyes Work for more details.

Macular degeneration occurs in older people (typically aged 60 or older) and is often called Age-Related Macular Degeneration (ARMD or AMD). Since it involves deterioration of the retinal area responsible for our sharpest vision, it can interfere significantly in daily life as it progresses and becomes more severe.

The exact causes are not well understood and research is ongoing. It does seem to run in families and to occur more often in Caucasians, especially in Caucasian females. Various studies have connected it to smoking, obesity, high blood pressure, inactivity, light eye color, and over-exposure to sunlight. However, some study results contradict other study results.

AMD starts out as Dry AMD and progresses to Wet AMD. This distinction has to do with the development of new blood vessels in the macula that should not be there.

Cataracts are a problem in the eye’s lens, while AMD involves the retina. At first glance they would seem to be quite unrelated. However, in 2003, the American Journal of Ophthalmology published an article about the data from three large studies on the association between AMD and cataract surgery. When those three sets of results were merged, it was found that the risk of AMD was 1.7 times higher after cataract surgery.

There is no consensus on why this should be. It could simply be that as we age, we are more likely to develop both AMD and cataracts. Or perhaps these two conditions share some risk factors that are not clear yet.

Another theory is that after cataractous lenses are removed, the retina is exposed to more blue light wavelengths. This theory gives rise to discussions as to whether blue-blocking IOLs will endanger older people by reducing their vision in dim light. IOLs that block blue light are Alcon’s ReSTOR IOL and aspheric AcrySofIQ IOL. Yellow-tinted sunglasses also block blue light and can be purchased everywhere.

Since studies contradict each other, more research is needed. If you would like to learn more about how these considerations apply to your own situation, please contact us for an experienced ophthalmologist near you.